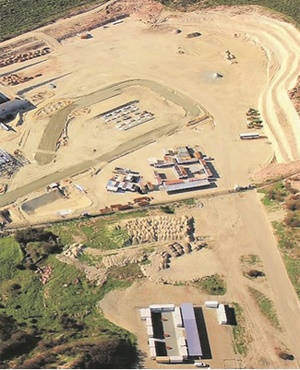 For oil traders, there’s no place quite like Saldanha Bay. When prices slumped in 2014, trading houses generated outsize profits by storing millions of barrels of crude in the deep-water harbour north of Cape Town.

Now storage facilities at the port – where South Africa built vast concrete bunkers in the 1970s that helped insulate the apartheid regime from United Nations oil sanctions – are expanding.

Saldanha could have turned into a white elephant, but it held an unforeseen commercial potential. When a price structure known as contango emerged in the oil market, traders were able to lock in profits by storing crude for future delivery to buyers elsewhere. This happened in 2009 and again four years ago, when companies from Mercuria Energy Group to Vitol Group used the site.

While those opportunities have evaporated as oil rebounded, the strategic importance of the shipping route around the Cape of Good Hope has grown.

“There’s nothing that really compares with Saldanha Bay,” said Joe Willis, a senior research analyst at Wood Mackenzie Ltd, who highlights its accessibility to supertankers plying an ocean highway that connects key markets in Asia, Europe and the Americas. “It’s quite unique in its own right.”

After the release of Nelson Mandela and the end of sanctions, South Africa’s Strategic Fuel Fund gradually sold off its reserves and began to lease out Saldanha’s six concrete tanks – which from satellite photos resemble a line of computer chips on a circuit board – to trading companies.

About 5.8 million barrels a day of crude moved around the Cape of Good Hope in 2016, and accounted for about 9% of all seaborne-traded oil the previous year, according to the US Energy Information Administration.

Saldanha is currently able to hold as much as 45 million barrels, enough to fill more than 20 large tankers. By comparison, Cushing, the better-known US oil storage centre in Oklahoma that serves as the pricing point for the West Texas Intermediate oil benchmark, can hold about 75 million barrels.

The capacity of Saldanha will grow by almost 30% with the addition of more than 13 million barrels of storage and blending facilities by the end of next year, according to a joint venture of Hamburg-based Oiltanking GmbH, the world’s second-biggest independent crude storage provider, and local company MOGS.

Following the contango bonanza, in late-2017 traders sold oil stored at Saldanha as prices more than doubled. For most of 2015, 2016 and the early part of 2017, the market was in contango, which allows traders to buy crude, put it into storage and lock-in a profit for a future sale by hedging forward. Profit at Vitol, the world’s biggest independent oil trader, climbed to a four-year high of $1.6bn in 2015.

“Saldanha Bay has played an important part in our evolution as a company,” said Matt Lauer, a spokesperson for Mercuria in Geneva. “We are always looking at the means to provide solutions for global supply requirements. By finding value in existing infrastructure, we conserve resources and fulfill the needs of our counterparties.”

Saldanha’s storage facilities, a few miles beyond the crayfish restaurants of Langebaan, also afford traders the advantage of privacy. A small industry has grown up around using satellite photos, thermal imaging or even helicopter trips to figure out how much crude is stored in strategic locations, such as Cushing, by observing the roofs of tanks, which typically rise and fall as they are filled or emptied.

Saldanha’s partially buried concrete tanks give away fewer clues, even inspiring a frustrated lament from TankerTrackers.com, an online community that keeps tabs on movements of the petroleum.

The expansion should increase the hub’s appeal to international oil traders. Oiltanking MOGS Saldanha, the joint venture unit, is building the new capacity with a fixed roof design, though in a different configuration of 12 tanks of 1.1 million barrels, Chief Executive Officer Dirk Exalto said in an interview. This allows partial cargoes to be unloaded and blended with other oil grades, according to Willis.

“What we’re trying to do is try and create a more flexible blending location,” Exalto said. “We see a lot of flows from South Africa and West Africa that pass by the Cape.”

The first three tanks of the terminal are scheduled for completion in the third quarter, with the remainder finished by mid-2019.

There’s been interest in the project from international traders as well as refiners and South African companies, according to Exalto, who declined to identify them.