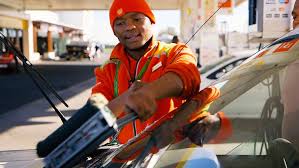 This petrol attendant became a national hero after paying for a customer’s petrol. He’s since received thousands of rands in online donations from the public.

On 30 May this year Nkosikho Mbele (28) paid for 21-year-old Monet van Deventer’s petrol at the Shell Ultra City at Macassar, situated on the N2 near Cape Town. Monet had left her bank card at home.

Of all the donations – including weekend holidays – there’s one gift that Nkhosikho, aka Sam, is especially grateful for: a Bible in his mother tongue.

In early July the South African Bible Association, an NGO, invited him to their office in Bellville, Cape Town. There Dirk Gevers, who heads the organisation, presented Sam with an isiXhosa Bible.

“My mom, Ndileka, raised me in the church. I used to attend church services with her as a child to hear the Word of God. I was taught to follow Jesus’ example.”

He says his life changed dramatically after Monet wrote about his good deed on Facebook and the post went viral. “Before, I led a normal life as a Shell petrol attendant.

“The things that are happening to me now are all thanks to God. I love what God’s doing in my life. My life is a miracle,” he tells YOU.

Lucky Nkhoma, head of communication and publicity at the Bible Association, says Sam’s values of active charity and kindness is in line with his own organisation’s values.

“We do Bible translations, print and distribute Bibles and we wanted to gift him one,” Lucky says. “We also wanted to honour him for his kindness,” says Lucky, who read the social-media post about Mbele’s gesture.

“He was excited to be here. He’s a humble national hero.”