PIC: Another truck petrol-bombed in Cape Town, one injured 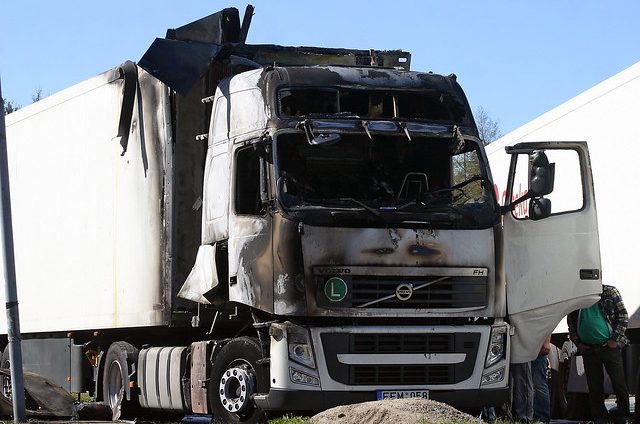 A truck assistant suffered burn wounds to his face and hands after a bread truck was allegedly petrol-bombed near Strand on Saturday.

This is the second incident of a truck being petrol-bombed in the area in less than a week.

City of Cape Town fire services spokesperson Jermaine Carelse said a team of 12 firefighters responded in two fire engines and a rescue vehicle at 13:30 to the burning truck on the corners of the N2 and Onverwacht street in Lwandle.

While extinguishing the blaze, they treated the man for his burn wounds.

“The fire was extinguished at 14:15 and the patient was transported to a nearby hospital by a Metro ambulance,” Carelse said.

“The scene was handed over to the SAPS for further investigation.”

Police have confirmed the incident.

“Our crime scene experts are currently on the scene searching for more clues following a truck that was thrown with a petrol bomb [on Saturday] afternoon in Lwandle,” police said in a statement.

“The driver with his two passengers were at the corner of Onverwacht road and N2 highway in Lwandle waiting for robot to turn green when three unknown men approached them and threw the truck with petrol bomb and then [ran] away.”

A case of malicious damaged to property was opened and is being investigated by Lwandle police detectives.

On Wednesday, a truck driver broke his collarbone after fleeing from a truck that was petrol-bombed.

A video shows two truck drivers sitting inside a stationary truck, when the petrol bomb is thrown. Both men fled from the truck which was at a red light on Broadlands Road in Somerset West.

In June, an articulated truck was set alight on the N2, also in Somerset West, with some of the highway being closed, City of Cape Town traffic officials confirmed at the time.

Also in June, Bernard Groenewald died of his injuries after being petrol bombed on the N1, near Touws River.

And in May, Christopher Kgomo was killed on the N1 near De Doorns in the Western Cape when a boulder was thrown through his window. 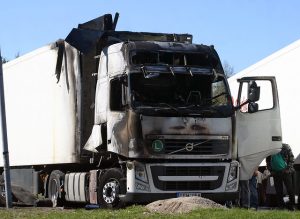